Each year, the Streaming Video Alliance opens its doors to innovative startups and small companies as part of its Membership Grant Program. For 2022, the Alliance welcomed a number of very interesting companies exploring and productizing technologies for the streaming video space. Netskrt is one of those. This blog is part of a series showcasing each of our Grant Program recipients, the technical problems they hope to solve, and the value they bring to the streaming video ecosystem.

Content delivery networks (CDNs) have been foundational to the internet for several decades. The concept is, of course, relatively simple: by replicating frequently downloaded content and distributing it closer to the end user, performance is vastly improved. But the explosion in streaming video has strained this technology and exposed instances where it simply does not work. When was the last time you tried to stream internet video while in flight? Or on a train? Or in a remote community? Better yet, try watching an instant replay on your smartphone along with tens of thousands of your closest friends at a live sporting event. The point is that, for many use cases outside the home and office, conventional CDNs have reached the limit of their effectiveness.

Making matters worse, even as additional capacity is thrown at network infrastructure, e.g., 5G, streaming video is moving from SD to HD to UHD and from 30 frames per second to 60 to 120, increasing the burden on networks exponentially. Clearly, it’s an arms race and streaming video is winning. Just as clearly, while CDNs will continue to be essential, radical improvements are required if we’re going to deliver a ubiquitous, always-on streaming experience to consumers. Some content providers have attempted to address this problem by allowing subscribers to download video content for offline viewing. This is, at best, a weak solution to an intractable problem and does not address the challenge of delivering live content at all (and good luck convincing young millennials and gen-whatevers that, in addition to booking flights and packing their bags, they now must predict what they’re going to want to watch and download it ahead of time).

The most obvious solution would be to move CDN caches even closer to the end user, but this is easier said than done. As the number of end users downstream from the CDN cache declines, so  does the financial justification for deploying the cache. It might be nice to have a CDN cache in your home with 99 percent of the most commonly requested titles from, say, Amazon Prime Video, but it makes no economic sense to do so.

The use cases where conventional CDNs come up short are characterized by: (a) large pockets of users and (b) insufficient or intermittent backhaul bandwidth. Planes, trains, buses, remote communities, and stadiums/arenas are good examples. In these cases, pushing the CDN cache all the way into the end environment can be cost justified because there are lots (hundreds to tens of thousands) of end users in those environments. But, as is frequently the case, when we do that, we run into yet another problem and here the problem is technical.

CDNs are incredibly intelligent and flexible entities. If the nearest CDN cache lacks the content you are requesting, that request will automatically move to caches further upstream, potentially all the way to the origin, to get and return the content. In addition to be able to access the content you’re looking for, downstream caches learn about it and, if sufficiently popular, save copies so that subsequent requests can be fulfilled more efficiently. But in the use cases outlined above, moving the CDN cache into the remote environment—and on the other side of intermittent or constrained backhaul connections—causes underlying CDN algorithms to fail. In these cases, if the nearest CDN cache (the one deployed in the local environment) lacks the content, the player will timeout and fail; due to constrained or intermittently available bandwidth, it is not possible to support more than a handful of end users. This is the reason that streaming media requests are typically blocked on airplanes and trains.

Addressing these increasingly important use cases in a manner compatible with existing CDNs requires a new approach where the serving cache is located at the absolute edge of the network infrastructure: an “edge CDN (eCDN).” Although the word ‘edge’ is widely used in differing contexts, here we mean the real edge—the last network to which the user is connected.

eCDNs satisfy the streaming requirements of users in difficult-to-serve locations by flipping the normal CDN cache fill mechanism from “algorithmic pull” (i.e., user content requests drive cache fill) to “deterministic push” model driven by cloud-based machine learning. A key aspect of the deterministic push approach is an understanding of the nature of the data being distributed. Whereas existing CDNs operate on the basis of “data chunks” (i.e., “here’s a URL for a chunk of data; go get it”), eCDNs understand that what is being requested, at least for streaming video use cases, is a title. The title is defined by a manifest that describes all the variations for the title and any associated ads or ad break points. Understanding the nature of what is being requested allows eCDNs to push the entire title down to the edge cache, ensuring that once a title begins playback, it can play to completion in high quality.

Additionally, given the point at which they’re deployed, eCDNs can also deliver live content in a highly efficient manner. A single live broadcast stream can be delivered to the serving eCDN cache and replicated to as many end users as required. Each end user can pause, rewind, and fast forward independent of other users.

CDNs have long played a vital role in the internet infrastructure and will continue to do so. But going forward, technical enhancements are required to ensure their ability to deliver a high quality of experience to any end user, in any location. The advent of the edge CDN compliments existing CDNs and substantially extends their reach.

Netskrt Systems is technology innovator that is first to market with an edge content delivery network (eCDN) solution. The Netskrt eCDN brings the expanding universe of direct-to-consumer streaming internet video to previously unserved locations, notably rail and air transportation. For the first time, rail and air passengers are able to partake in a video experience indistinguishable from what they enjoy at home. Visit www.netskrt.io for more information. 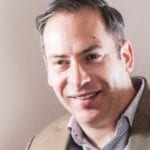 Steve has over 15 years’ experience in the CDN industry and is a customer-obsessed Product Management and Product Strategy professional. Prior to joining Netskrt, Steve was responsible for Product Management and Product Strategy at Limelight Networks, a global CDN. Steve has extensive experience in the CDN and media distribution industries spanning video workflows from field encoding to global CDN operations and solution engineering for Broadcast, Media & Entertainment and Enterprise markets. Steve has overseen the successful growth of streaming media and digital content distribution product and services portfolios and has also designed new service offerings, most recently in Edge Compute and Ultra-Low Latency streaming.